On June 18th, 2015, a group of Adirondack Botanical Society members along with a student from SUNY Plattsburgh accompanied Steve Young, the chief botanist of the NY Natural Heritage program, to Whiteface Mountain. Our purpose was to assess the condition of the area of alpine vegetation that had been affected by the recently completed road maintenance on the Veteran’s Memorial Highway as well as outplanting plants that had been temporarily removed the previous year prior to construction. We would like to thank the NYS DOT for their support and access during this project.

New York State has less than 200 acres of alpine habitat total, including the summit of Whiteface Mountain, which is home to a number of threatened and endangered plant species. Whiteface Mountain has one of the two documented populations of snowline wintergreen (Pyrola minor) (Figure 1), a state endangered species (1, 2). Alpine goldenrod (Solidago leiocarpa) and bearberry willow (Salix uvi ursi) are two state threatened species that are also found in the Whiteface Mountain alpine area along the roadside.

Due to the proximity of these alpine species of concern to the road construction, we enacted a plan to restore part of the affected area. This plan included collecting seed from snowline wintergreen and attempting to propogate it in the SUNY Plattsburgh greenhouse (see blog post here). We also transplanted alpine goldenrod and bearberry willow to locations on site in 2014 that would be less impacted. The transplanted alpine goldenrod appears to be thriving in its new spot (Figure 2). 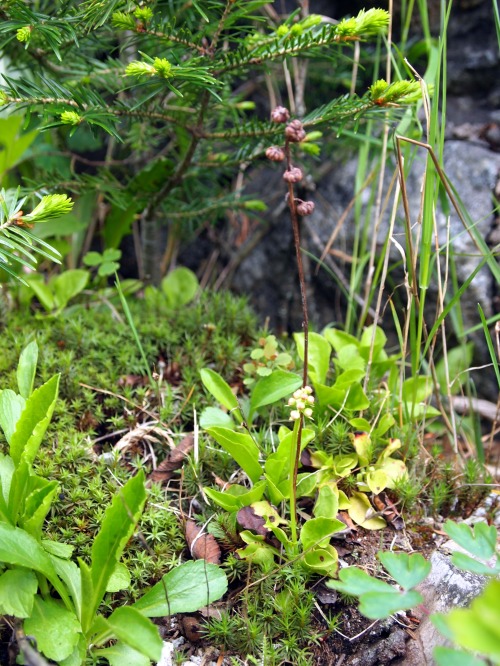 Lastly, we dug out several goldenrod and willow plants that would have been destroyed in the road construction and tended them in the SUNY Plattsburgh greenhouse until they were planted back onto the site this June (Figures 3 and 4).

Figure 3. Rachel Schultz with alpine plants rescued from the roadside of Whiteface Veterans’ Memorial Highway in June 2014. The plants were tended in the SUNY Plattsburgh greenhouse prior to being transplanted back on Whiteface Mountain on June 18th, 2015. (Picture taken by Ray Curran) 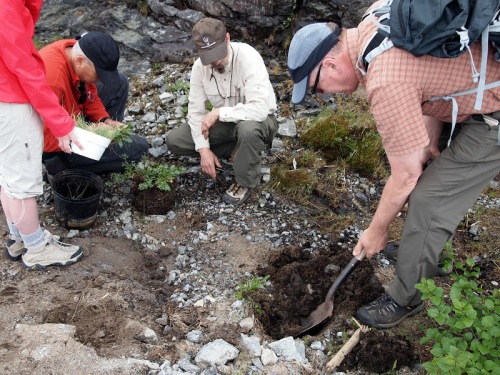 Overall, the assessment of the site was positive. The snowline wintergreen population did not appear to have changed from 2014, and the alpine goldenrod transplants appeared to have taken hold thanks to the herculean volunteer effort by Emily Tyner to haul water from the base of the mountain to water them during the summer of 2014. Many of the bearberry willow transplants were also still alive and will hopefully serve along with the recently planted shrubs to stabilize the rocky bank adjacent to the road (Figure 5). Future restoration efforts may include an attempt to expand the snowline wintergreen population through the outplanting of propagated seedlings. This depends on the success of the seeds that were planted last year, which may not be apparent for another year or so (3). Furthermore, erosion control may need to be put into place to stabilize some areas to establish plants, according to a plan written by my Restoration Ecology students this past spring.

Figure 5. Steve Young and Ray Curran transplanting an alpine goldenrod in gravel on the north side of the Whiteface Veterans’ Memorial Highway.